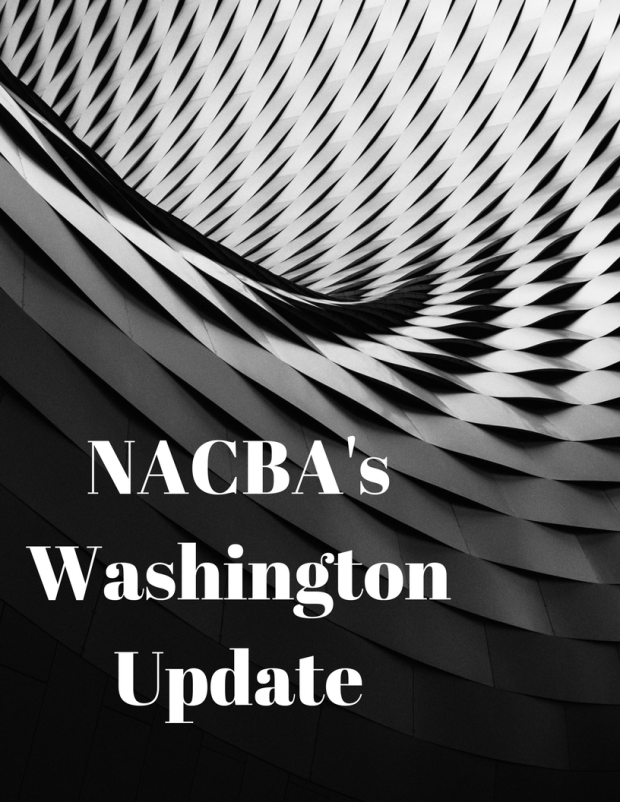 NACBA Staff member, Krista D’Amelio gives us the latest update from Washington. Stay informed about significant and relevant activity on the part of Congress, regulatory agencies and interest groups/think tanks.

On The Hill On Tuesday, July 25 the House of Representatives passed H.J. Res. 111, a resolution to repeal the new Consumer Financial Protection Bureau (CFPB) rule to restore consumers’ ability to join together and hold banks and lenders accountable in class action lawsuits when they break the law. The CFPB issued the arbitration rule on July 10, 2017, an effort to restrict banks and lenders’ use of forced arbitration — fine-print clauses in contracts for credit cards, bank accounts, and other financial products that prevent people from banding together to challenge fraud by big banks. Representative Walter Jones (R-NC) was the only Republican to vote no on H.J. Res. 111. A full list of recorded votes has been posted on the House Clerk website. The Senate is expected to vote on a similar bill filed as S.J Res. 47.

H.R. 3553 was introduced by Congressman Tom Marino (R-PA) on July 28th to amend title 11 of the United States Code to increase the amount of compensation paid to chapter 7 bankruptcy trustees for services rendered. Congressman Ed Perlmutter (D-CO) co-sponsored the bill and a summary is in progress.

In The Agencies The Federal Trade Commission (FTC), state, and local authorities will convene a conference in Los Angeles on Sept. 7, 2017, to help educate military consumers and train military attorneys, law enforcement personnel, and consumer protection officials to address consumer fraud and other issues that affect servicemembers and their families. This event follows the FTC’s recent successful Military Consumer Financial Workshop, held July 19 in San Antonio. More information can be found by visiting the FTC’s website.

FROM THE INTEREST GROUPS On August 1, 2017, the Economic Policy Institute released a fact sheet debunking industry claims that consumers recover more money in arbitration than class actions. They re-examined data from the CFPB study and found that the average consumer is ordered to pay their bank or lender $7,725 in arbitration. The EPI findings conclude that class actions return hundreds of millions to consumers, while forced arbitration only pays off for banks and lenders.

On July 13, 2017, Director of the U.S. Trustee Program Clifford White addressed the National Association of Chapter 13 Trustees at their 52nd annual conference. During his speech, Director White spoke on issues including: marijuana assets in bankruptcy, stale debt claims, efforts to fight fraud and debt abuse, debtor education and the Department of Justice’s proposal for a uniform national chapter 13 plan. You can read Director White’s entire speech on the Department of Justice website.