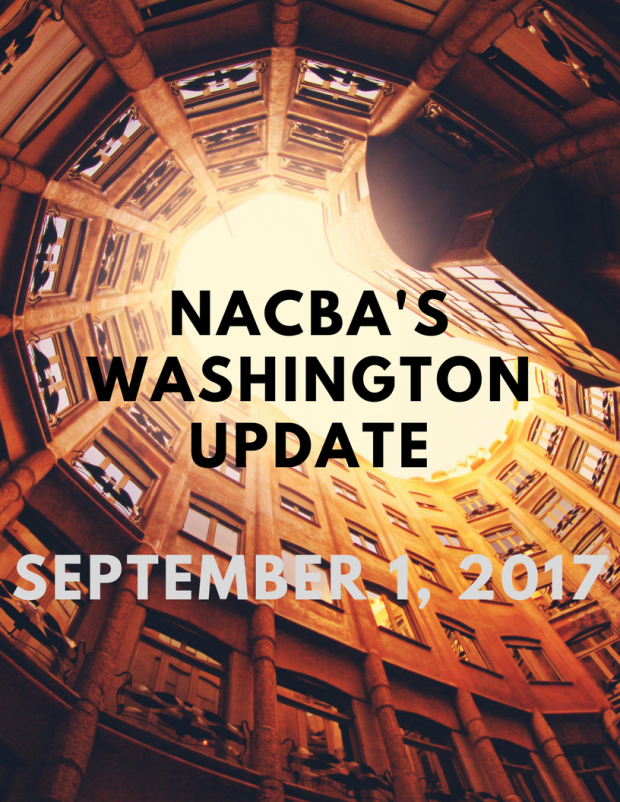 Check out the latest update from Washington, designed to keep NACBA members informed about significant and relevant activity on the part of Congress, regulatory agencies and interest groups/think tanks.

On The Hill Senators Elizabeth Warren (D-MA) and Al Franken (D-MN) sat down to discuss CFPB’s arbitration rule in a Facebook video published on Senator Warren’s page. View the video to hear the advice they provide on what viewers can do to stop Congress from “selling out to the big banks”.

In The Agencies The Consumer Financial Protection Bureau (CFPB) has filed an amicus brief in support of the Department of Education’s (ED) appeal asking the U.S. Court of Appeals for the Federal Circuit to vacate a preliminary injunction entered by the Court of Federal Claims that bars the ED from assigning defaulted student loans to certain small business private collection agency contractors and other contractors.  The injunction was issued in a lawsuit filed by companies challenging ED decisions not to award or continue contracts with such companies to collect student loans. The CFPB argues that by preventing the ED from assigning debt collectors to defaulted loans, the preliminary injunction impedes or prevents borrowers from managing their federal student loan debt.

The Trump administration has selected Julian Schmoke Jr. to serve as the Department of Education’s new chief enforcement officer. Schmoke is a former for-profit college official who previously directed campus operations at West Georgia Technical College and served as a dean at DeVry University. He will lead the Department’s unit that polices fraud in higher education. Specifically, Schmoke will lead the Student Aid Enforcement Unit established by the Obama administration to more aggressively combat fraud and deceptive practices at colleges and universities. Sens. Sherrod Brown (D-OH), Patty Murray (D-WA), Dick Durbin (D-Il) and Elizabeth Warren (D-MA) wrote a letter to Secretary DeVos urging that the person selected must “have relevant experience in consumer protection or litigation, managing attorneys, and conducting investigations with the highest ethical standards.” The unit Schmoke will oversee is also responsible for processing debt relief claims filed by federal student loan borrowers who say they’ve been defrauded by their college.

OTHER It is being reported that in the wake of Hurricane Harvey, about 80% of homeowners in the areas devastated by the hurricane lack flood insurance. This leaves many who escaped the storm with little financial help to rebuild their homes and lives. The Washington Post reports that only 17 percent of homeowners in the eight counties most directly affected by Harvey have flood insurance policies that cover up to $250,000 in rebuilding costs and $100,000 to replace personal belongings such as TVs and furniture. Losing a home without insurance compensation is financially devastating. A total loss could delay retirement or force people into bankruptcy.

Wells Fargo is now revealing it has found a total of up to 3.5 million potentially fake bank and credit card accounts, up from its earlier tally of approximately 2.1 million. The additional fake accounts were discovered by a previously-announced analysis that went back to January 2009 and that reviewed the original May 2011 to mid-2015 period. Moreover, Wells Fargo also revealed that thousands of customers were enrolled in online bill pay without their authorization. The review found 528,000 potentially unauthorized online bill pay enrollments.

TCPA Case Allowed to Proceed, But Not as Class Action

A two (2) day overview of cutting edge consumer bankruptcy education in a virtual format presented by some of the top bankruptcy experts in the United States.

Schedule conflict? No worries at all.
Register by 12/8/16 and the recordings will be emailed to you upon request.

Give yourself a gift and register for December’s Webinar!

Growing Your Bankruptcy Practice in 2017 and Beyond

If you want to build a law firm that supports your lifestyle, instead of undermining it, then join Richard James on Wednesday, December 14th at 3 PM ET. If you want 2017 to be the year that you finally build the law firm of your dreams, then you have to be on this webinar training. Learn the key strategies that hundreds of Richard James’ clients are using to grow like never before. This is real world, in the trenches advice you can put to practice right away.

Save the Date for NACBA’s Silver Anniversary Annual Convention

Interested in Sponsorship Opportunities at #NACBA25? Check out the Prospectus and join us in 2017!

Become a member of NACBA! Join today and take advantage of the benefits, networking opportunities and resources NACBA has to offer!

This is the latest issue of our weekly update from Washington, designed to keep NACBA members informed about significant and relevant activity on the part of Congress, regulatory agencies and interest groups/think tanks.  Feedback should be directed to Maureen Thompson.

Obviously, the big news out of Washington is the election results.  NACBA members who joined us for the November 18 webinar, “The 2016 Election: What Now?,” heard NACBA leaders and our representatives in Washington answer the questions about what to expect in 2017 from the Administration, Congress and the courts.  We are planning to issue a special repot next week after President-Elect Trump announces his full roster of cabinet picks.  We will focus not only on what to expect from the White House come January, but also the key agencies of interest to NACBA: Department of Justice, Consumer Financial Protection Bureau, and the Department of Education, as well as the leadership and key committees in Congress.

Continue reading for non-election news out of Washington this week.

ON THE HILL Congress remains focused on Wells Fargo.  Senator Sherrod Brown (D-OH) – ranking member on the Senate Banking Committee – and Representative Brad Sherman (D-CA)– a member of the House Financial Services Committee – introduced legislation that will give Wells Fargo customers who were victims of a fraudulent account scheme their day in court. Wells Fargo is using the forced arbitration clauses it tucked away in the fine print of contracts customers signed when they opened legitimate accounts to block them from suing over the fraudulent accounts.  Read more about the bill here.

Senator Mike Enzi (R-WY), chairman of the Senate Budget Committee reacted to a General Accountability Office (GAO) report on the cost of Department of Education’s Income Driven Repayment (IDR) plans for student loans (see “In the Agencies) by harshly criticizing the Department, which is responsible for calculating the cost of the program.  “This Administration has been manipulating the terms of the student loan program without the consent of Congress, while shirking its statutory duty to carefully assess the cost impact of those changes,” Enzi said in a statement. “It will be crucial to consider updates to the Federal Credit Reform Act because Congress is not receiving credible, transparent cost data under the existing statute, as this report suggests.”

A group of 21 current and former members of Congress filed an amicus brief in support of the Consumer Financial Protection Bureau’s (CFPB) petition filed with the D.C. Circuit seeking a rehearing of its decision in CFPB v PHH Corporation.  Read the brief here.

IN THE AGENCIES The Government Accountability Office (GAO) released a report critical of the Department of Education’s approach to estimating the cost of income-based student loan repayment plans, which allow borrowers to make student loan payments based on how much they make.  According to the GAO report, these plans will cost more than twice as much as the Education Department expected them to.  The Education Department’s approach to estimating the costs of the repayment plan “do not ensure reliable budget estimates,” the GAO report says.   You can read the report here.

The Education Department responded to the GAO report, saying it “generally concurs” with the findings, but noted that “the decisions made (and critiqued in this report) were based on existing staff and systems resources available, assessed impact, and consideration for conservatism.”  “The lifecycle of a student loan is exceedingly complex, with a multitude of projection paths and outcomes,” the department’s response said. “Estimating the federal cost of student loans is a task we take very seriously, and we are constantly seeking to enhance and refine our cost estimation models.”

On November 18, the CFPB petitioned the U.S. Court of Appeals for the District of Columbia Circuit (D.C. Circuit) for an en banc review of PHH v. CFPB. The petition, which was expected, argues that this case represents “what may be the most important separation-of-powers case in a generation.” You can read the petition here.

More from the CFPB… the CFPB has taken action against B&B Pawnbrokers, Inc. for deceiving consumers about the actual annual cost of its loans. In a lawsuit filed in federal court, the CFPB alleged that B&B Pawnbrokers broke the law by misstating the charges associated with pawn loans. The CFPB’s lawsuit seeks to end B&B Pawnbrokers’ illegal practices, get restitution for the consumers it harmed, and impose penalties. You can read the lawsuit here.

In good news for consumers, the Internal Revenue Service (IRS) aims to include as many homeowners as possible in a taxable-income exclusion set to expire at the end of the year.

According to Notice 2016-72, the IRS will accept debt reduction modifications as long as the borrower receives a trial offer by the sunset of the Home Affordable Modification Program, set for Dec. 30, 2016. The program was created to encourage banks to lower monthly mortgage payments to help homeowners stave off foreclosure after the subprime mortgage crisis.  “This is trying to capture as many people as possible in the folks that can benefit from that tax assistance,” Sarah Bolling Mancini, of counsel at the National Consumer Law Center Inc., told Bloomberg BNA Nov. 28.

The IRS guidance focuses on the programs that allow homeowners to reduce the principal balance on their loans, not programs that just reduce interest rates or stretch repayment terms, Mancini said.  Homeowners must receive a trial period plan from their bank before Jan. 1, 2017, but don’t need to complete the plan or enter into a permanent version before the deadline, the IRS said. Typically, a bank will send out a letter saying a homeowner is approved for a trial plan, and the homeowner must then make a trial payment for the next three months before a permanent version will be offered, Mancini said.

FROM THE INTEREST GROUPS A group of 10 consumer advocacy organizations has also filed an amicus brief in support of the Consumer Financial Protection Bureau’s (CFPB) petition filed with the D.C. Circuit seeking a rehearing of its decision in CFPB v PHH Corporation.  Read the brief here.

OTHER For easy access, here is a link to the CFPB Ombudsman’s webpage. There you will find their 2016 Annual Report, which you may find informational as well as a useful as a resource.